A few weeks ago, Mitch Prensky, the Chef-Owner of Supper Restaurant (@supperphilly) tweeted out some interested news. Supper, which happens to be one of my favorite restaurants, was planning on having a New Year’s Day “Hair o’the Dog” Brunch. What is so interesting about that, one may ask. Well, he and his wife, Jennifer, were holding the brunch as a fundraiser for PAWS Animal Rescue…and we could bring our dog!!! Now, if I haven’t mentioned it before, my husband and I have a four-year old English bulldog named Jewels and she is the light of our lives. We rescued her from HeavenSent Bulldog Rescue, an amazing, volunteer-run, breed-specific rescue, and are big advocates of pet adoption/rescue. We love going to brunch during the warmer months because we can sit outside with Jewels and have a leisurely meal. Somehow, winter brunch isn’t quite as fun without our little bulldog so we were SUPER excited at the opportunity. Brunch with Jewels AND an awesome meal??? Yes, please!

We woke up late on New Year’s Day and headed up to 9th & South ready for a tasty meal. We found a parking spot right away (this is a big deal!) and made sure Jewels peed before we entered the restaurant because we didn’t want to be “those people” whose dog peed in the middle of Supper. When we got to the door, we were greeted with this sign. 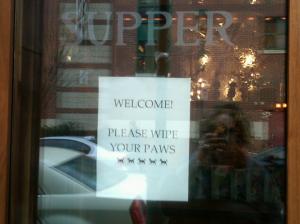 Once we entered the restaurant there were fresh cloth napkins for paw cleaning. After a quick wipe down, we walked up to the hostess stand and were greeted with overwhelming love and rubs for Jewels. They also gave her a squeaky toy!  Jewels was visibly excited about the opportunity to eat inside with us. She obviously knew that something special was going on and relished in the excitement AND extra attention. She tends to be a bit of an attention whore sometimes, but I’m ok with that. We headed over to our seats and perused the menu. My order went as follows: water, coffee, bloody mary, food. I was torn between the traditional bloody mary and the bloody maria, Supper’s spicier version, but I kept things simple and was pleased with the result. 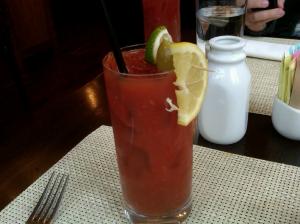 There was still a nice bite and plenty of chewy horseradish. I LOVE horseradish. My husband got something similar with bourbon instead of vodka–he can’t quite recall but remembers that it had Kentucky in the name. On another note, check out the little milk bottle behind my bloody mary–they served the milk for my coffee in that container. Too cute!

Even though there were tons of tasty sounding things on the menu, the best post-New Year’s Eve (and pre-parade) meal for us both was the traditional Supper burger.

The burger had caramelized onions, smoked bacon, gruyere and  roasted tomatoes with a side of duckfat fries and house made pickles. Need I say more? Literally, no words could describe this better than looking at the picture and ingredients. Well, maybe they could, but none of MY words could…Meanwhile, Jewels was playing with her toy and licking her lips after tastes of burger.

While we were dining, we ran into a Twitter “friend” of mine and her pug, Meatball. Meatball and Jewels sniffed each other a bit, but each of them seemed more interested in the surrounding people–and food, of course.  Meatball is a cutie though! 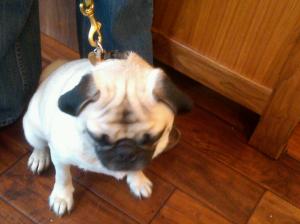 As we were waiting for the check, Jewels looked up at me–“any burger left, Mom?”

It was a successful brunch for all and hopefully Supper was able to give a nice donation to PAWS for all of their hard work and dedication.  Thank you to Supper for helping kick off our 2011 with a smile.

Besides the fact that it’s the day before Monday, I tend to love Sundays.  My favorite kind of Sunday is the lazy kind with a world of possibility. In the fall and winter we have football season (more about that in a few months) where we’ll throw something on the stove or crockpot to simmer or braise away for a few hours until game time. From May-November, I am blessed with one of my favorite things of all time–Headhouse Square Market. Now, I love Farmers Markets and always have. I grew up in West Philly and have spent countless hours at the Clark Park’s farmers markets, flea markets and outdoor fairs. My husband and I try to give business to the small Wednesday market at the Fountain on Passyunk each week. However, nothing holds a candle to Headhouse. From the Sausage Truck (vegan sausage, anyone?!) to Talula’s Table and Griggstown, the Sunday market has everything I could possibly need. Sometimes–if we’re going on vacation or already have a full fridge–we don’t buy anything. We simply stroll under the shambles with our dog who SORELY misses the organic dog treat stand from last year!

Many Sunday visits to the shambles include brunch at the taco stand or the Sausage Truck. We’ll get our goods and sit on a stairwell while the dog begs for whatever we’re devouring. I usually end up tossing something her way, much to her delight. This morning, with the weather in our favor–we could eat outside with the dog–we decided to splurge on a real brunch.  Due to the ominous clouds above, we decided to hit up Hawthorne’s because it is close to our house and we figured we’d be able to get a table quickly. We got to Hawthorne’s and snagged up one of the last outdoor tables despite the host’s warning that it may start raining. We figured we’d order quickly and get our food to go if the skies opened up.

We’ve only been to Hawthorne’s once before and I had SOS (aka creamed chipped beef on toast.) As a former vegetarian, I had never eaten SOS but had always been intrigued. I figured it was time and quickly learned that I love SOS! For that reason, I was tempted to have the dish again (I tend to be a repeat orderer when it comes to something I like) but was drawn to a few other menu items, including the chicken salad sandwich on a baguette. I ended up going with the “Captain Ahab” platter of an everything bagel with lox, cream cheese, capers, red onions and mixed greens due to a recent lox craving. I couldn’t complain.

My husband ordered the “steak and eggs” which was a decent sized helping of braised beef with shirred eggs and a side of Claudio’s mozzarella and tomato salad. I didn’t get a chance to snap a picture before he dug in, but we also got an order of home fries to split. I like their home fries. Heavy on the rosemary and lots of fried pepper and onion. Yum! 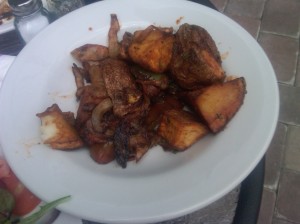 My favorite part of the meal was the couple sitting across the way with their two dogs. Apparently one of them is a beer lover!

After brunch, the weather continued to work in our favor and we headed over to the Headhouse Market.  I’ve been drooling over a recipe for scalloped tomatoes/tomato bread pudding that I’ve seen in a number of iterations of the past week and knew that I wanted to get some fresh tomatoes so I could finally make it. We strolled under the shambles, checking out the vendors, including the largest and strangest looking squash I’ve ever seen from the Asian produce stand (sorry, no pictures) and allowing my dog to be center of attention. I walked away with a container of tomatoes and some corn with directions on how to keep it fresh. Apparently you are supposed to keep it damp in the fridge. Who knew? No wonder my corn has been drying out so quickly.