On the way back from Kathy’s Cafe on Friday, my husband and I stopped at Dincher’s Roadside Farmstand in Tivoli, PA to grab a few tomatoes for dinner. Fifteen dollars later we left with a a carton of tomatoes, half a dozen ears of corn, garlic, lemon, nectarines and a bushel of peaches. OK, it probably wasn’t a bushel and I’m not even entirely sure what a bushel entails, but let’s just say we bought a lot. For some reason, my non-baking self smelled the peaches and became immediately inspired to make peach cobbler. We were busy making a tasty pasta meal for dinner that evening (oh yeah, have to blog that one) so I figured I’d save the cobbler for the next night when I had a little more time.

The next day was a gorgeous, sunny Saturday–one of the last beach-worthy days we’ll get up in the mountains as the temperature tends to run 10 degrees cooler than here in Philadelphia. I spent most of the day lounging at the beach and sailing with my father, an activity that deserves a non-food related post all to itself. As a side note, I spent the weekend reading The Art of Eating In: How I Learned to Stop Spending and Love the Stove by Cathy Erway. Erway spent two years “not eating out” in New York and blogging the process. More about this later.

Mid-afternoon I tore myself away from the beach to run home and prep the peaches for the cobbler. Marion Cunningham (p.s. Wikipedia gives Marion NO love!) told me that I can peel peaches by dipping them briefly in boiling water and then removing the skins with a sharp knife. This technique has always scared me for no good reason. Hence my permanent face off with tomato sauce, or any recipe that involves peeling tomatoes, for that matter. Much to my surprise, this technique was SHOCKINGLY easy. I dipped the peaches in the water for 15-30 seconds and drained them with minimal splash burns to my arms and torso. I then brought them outside to the back deck and peeled them with my fingers. I don’t need no stinkin’ knife! The skin slipped off like (insert a cheesy simile here.) Aren’t they gorgeous?

I set them aside for later that evening. We were making these little guys, 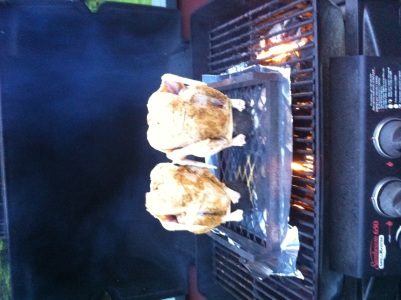 so I wanted to time the cobbler so that we were able to eat it hot out of the oven. I’m not sure why the picture’s sideways but you get the idea.

Fannie Farmer’s Apple Cobbler (I substituted peaches. Marion told me it was ok)

Preheat oven to 375′. Pour 4 tbsp of the butter into the bottom of the pan and spread the peaches over it (I felt as if 4 tbsp was a ton of melted butter and only used 2-3 tbsp. It was still a lot)

Before I continue, let’s remember two things–I am not a baker. I don’t do well with recipes that require, um, following. In something like peach cobbler, say, one tbsp of baking powder is a heck of a lot different than zero tbsps. Remember this for later.

Mix 1/4 teaspoon of salt with 1/4 cup of sugar and sprinkle over the peaches. This is where my problems start. I think I need to do a blog post on something I’ve recently deemed “OPKs” or “Other People’s Kitchens.” I’ve done a fair amount of cooking in OPKs lately and always seem to encounter a problem. In this situation, I discovered that my parents did not have any sugar. After pitching a minor fit, I found a rock solid box of brown sugar in the fridge. My mood improved as I especially love brown sugar. After watching me dangerously saw hunks of sugar off of the larger mass, my mom told me that I could microwave the sugar to soften it. That didn’t work too well.

I returned to my hacking ways and got enough brown sugar chunks to equal 1/4 cup or so.

Pour the remaining butter into a bowl, add the milk and egg and mix well.

Mix the flour, baking powder, remaining 6 tbsp of sugar (somehow I missed that she gave this measurement and channeled my 7th grade math class to figure out 2/3-1/4)  and remaining 1/4 tsp of salt in a bowl. It was about this time that I realized that my parents did not have any baking powder. I frantically paged through the cookbook trying to find another recipe–a crumble, a brown betty???–that did not require baking powder, and ordered my husband to start reading recipes to me. It was at that moment that my mother saved the day and recalled that there was baking powder in the pantry. Mom to the rescue! By that time, however, I had already added the flour to the egg/milk/butter mixture with a big old dash of what the hell. I never understood why baking makes you mix things in separate bowls anyway. How picky and unnecessary. I then glopped the batter onto the peaches, tossed it in the oven and prayed. 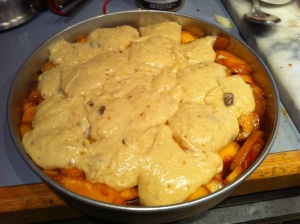 Look at the sugar chunks. Ridiculous.

Bake the cobbler for 35-45 minutes or until the top is golden brown. OK, apparently you’re supposed to cook until a toothpick inserted in the cobbler part comes out clean. I didn’t do that, mine just looked done. While it was baking, we enjoyed these little fellas (which took a little longer than expected, but that’s another story)

If you have never tried beer can/beer butt chicken, please do. It’s the easiest thing in the world and the result is a lovely tender meat with a crispy and well-spiced skin.

The cobbler had a slightly cobbled appearance with a lovely golden brown top. 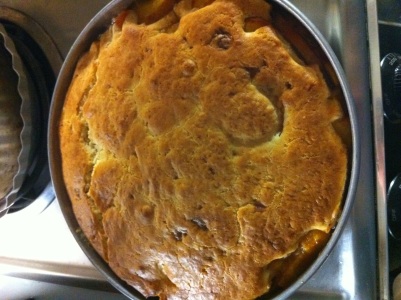 And we enjoyed it with a scoop or two of vanilla fudge ice cream from Hillside Farms, the best dairy in the whole wide world.