Fridays are usually take-out nights in the Row Home Eats household. After a long week, there’s nothing like curling up to a movie and a Los Jalapenos steak, pepper and onion burrito (hold the rice, add guacamole, please.) We don’t have to worry about cooking and our weekly food supply has diminished just in time for our Saturday shopping expeditions at the Reading Terminal. This Friday, however, we had some extra marinated flank steak calling our name. My butcher, Harry Ochs, has an amazing soy-ginger marinade that they use on flank steak and chicken breast. It’s normally available pre-packaged but, if not, they’re always happy to marinate your choice of meat to order. Flank steak is a difficult topic for us because I enjoy my meat a little more well done, while my carnivorous husband, Mr. Row Home Eats, likes it rare. We recently discovered a happy medium–we cut the steak into skewers and the pieces can be cooked to order. Happiness all around.

As I was contemplating the sides to go with our marinated steak skewers, my husband suggested an Asian noodle salad. The evening took off from there. Have I mentioned that Vietnam is my favorite restaurant? Have I devoted extensive posts to my adoration for Vietnamese food? Why is it, then, that I have never attempted to make it at home? That was it. I was sold on making a Vietnamese noodle salad topped with grilled steak similar to my favorite vermicelli bowl at Vietnam.

I did a little googling and came across this recipe. I didn’t realize it was Bobby Flay until just now so you can stop making fun of me. I did, of course, make major alterations to the recipe based on available ingredients and taste preference. My amalgamated recipe follows.

I started by slicing and skewering the flank steak to prepare it for the grill.

While we waited for the grill to pre-heat, I pulled out my mandoline and began wreaking havoc on my kitchen. I was inspired to use my mandoline after my recent post on kitchen tools. My friend, Alexa, commented that she loved her mandoline and I realized that I’ve only used it once, rather unsuccessfully, since we received it as a wedding gift. Another friend, Brad, shared his unfortunate mandoline experience (unfortunate for his finger, that is) and I was intrigued. Perhaps I should give my mandoline another shot, I thought.

Last time I used the mandoline, I was less than successful. It was difficult to get the hang of it and I couldn’t get a clean “sweep” back and forth. This time I started with the easy English cucumber. The mandoline glided back and forth effortlessly–I was back in business! Then I moved on the the cabbage. I was excited to try the julienne blade as I had only ever used the straight slicer. It wasn’t entirely unsuccessful.

Most of it got into the bowl I placed beneath…it went a little more downhill when I switched to carrots. In the end, I got a nice amount of sliced and julienned vegetables. I think they look rather pretty!

My mandoline was a little worse for the wear. Does anyone have tips as to how to remove carrot stains? 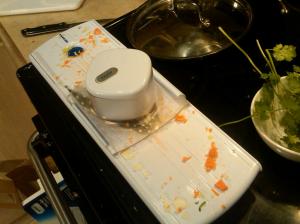 As I finished playing with my mandoline, the water started boiling for the rice noodles. As I was just about to toss them in, my husband came in and informed me that we were out of propane halfway through the cooking process. Chalk that up to another typical cooking experience. Sigh. Under the broiler they went and I began prepping the sauce.

I combined the soy sauce, lime juice, honey, cilantro and garlic in my mini-Cuisinart. See, I TOLD you I use that thing a ton! I was wondering why Bobby didn’t use any rice vinegar in his recipe so I tossed a bit in the mixture. After I whirred the thing a bit, I deemed the mixture a bit thin and decided to add some peanuts. Where did I get said peanuts? Well, for those of you who might have thought that I was some fancy foodie, think again. I picked the peanuts out of a bag of trail mix that was sitting in my fridge. Yes I did. Nothing is beneath me, my friends. Here’s the Cuisinart in action.

After the sauce was made, I brought the water back to a boil and tossed in the rice noodles. Instructions said to boil for 2 minutes but they weren’t quite ready and I added another minute or two. Then I drained them and covered in cold water, rinsing them well. The rice noodle give off  a lot of gumminess so the rinsing is key. Also, this is a cold noodle salad and we want to keep it that way. Here’s a boring white on white picture (with a shadow) to show you what it looks like at this point.

I pulled the flank steak out of the broiler and it looked darn good. We don’t need no stinkin’ grill! 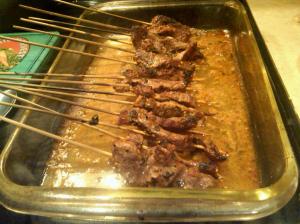 While the steak was cooling a bit, I tossed the noodles and vegetable slaw with the dressing. I didn’t think the dressing would be sufficient (it was only about a cup) but it soaked into the noodles nicely.  I also threw in some more ground peanuts, sliced green onion and some extra cilantro on top.

I mixed it all up and put the remaining cucumbers on top. 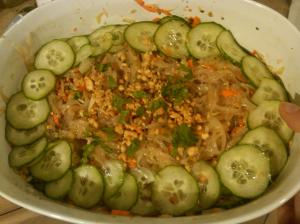 Then we dug in! I prepared myself a bowl with a couple slices of flank steak and, if I can say so myself, the dish looked eerily similar to my favorite place!

I topped mine with some sriracha because I like the heat! Then we settled down to an evening of Mad Men on DVD. The noodle salad was a hit! It had a very strong lime/acidic flavor, probably due to the extra rice wine vinegar I added. The vegetables and chopped peanuts added a welcome crunch to the chewiness of the noodles and the steak was, not surprisingly, a perfectly charred, meaty addition to the bowl. A word to the wise–this dish does not keep well at all. The noodles harden up a bit and the flavor subsides substantially. If you’re going to make it, be sure you eat it all the same day. It’s so darn good that it shouldn’t be too difficult.

One of my all-time favorite cookbooks is Molly Stevens’ All About Braising: The Art of Uncomplicated Cooking.  My mother introduced me to this cookbook a few years ago and I snatched it up at our favorite discount bookstore up in the mountains. As you can see (take a look at the lower right-hand corner) Jewels loves this book as well.

She’s not normally a chewer but I must have had some meaty remnants on the pages and who can resist that?  Anyway, I’ve made a few recipes in this cookbook, but my go to crowd pleaser has always been the Red Wine Braised Short Ribs with Rosemary and Porcini (p. 241 if you have the book.) This is one of those dishes that just has winter written all over it. I’ll usually serve it over noodles or mashed potatoes and finish the night with clean bowls and happy bellies. On the other hand, sometimes I feel like I’m stuck in a rut and will never make short ribs any other way. For that reason, I decided to be adventurous and do some summertime cooking–grilled short ribs. I got them from my butcher, Harry Ochs at the Reading Terminal, and went home with all intentions to grill.

As I puttered around the kitchen on Monday (after doing some preliminary research online) I started getting nervous about making grilled short ribs. I consider myself a beef short rib aficionado–what will happen if I don’t grill them correctly? My fears overcame me and I decided to do another version of the braise. I tooled around the internet a bit and decided that I’d do a beer braise in the crockpot. It is TOO HOT to have a braise going in the oven these days.

Remember that time I mentioned my inability/refusal to follow recipes? This is a perfect example. This is the best example of a recipe that you’ll get from me.

4 beef short ribs, cracked (apparently this makes for better flavor according to my butcher)

Molly Stevens told me that short ribs would benefit from 24 hours of light salting, so I laid them in a pyrex lasagna dish and brushed them with a light dusting of salt the day before I started my preparation. This is an optional step.

I began my browning the ribs in the olive oil. When they were sufficiently browned (5 minutes, give or take) I tossed them into the crock pot and added the chopped veggies (carrots, onion, celery) and garlic to the pot. I forgot to take a picture of the browning meat. See, I’m new to this whole blogging thing. After a minute or two, I added the herbs and bay leaf.

After giving the veggies another two minutes to soften, I added a splash of red wine and scraped the brown (delicious) bits from the bottom of the pot. I let the wine reduce, and added a bottle of lager. 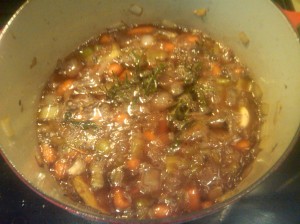 Every recipe that I saw was for “porter braised short ribs” but guess what? I didn’t have any porter so lager was going to have to do the job. I let the mixture bubble away for another minute or so, cooking away all of the alcohol. Then I poured it on top of the browned short ribs and set my crockpot on low.

Just a note on our crockpot. My husband’s good friend gave it to him as a present a number of years ago. It is a big box store cheapie, but does the trick. It just goes to show that you don’t always need top of the line items in your kitchen. We won’t discuss my love affair with Le Creuset at this time…

I cooked the ribs for about 7-8 hours on low and then let them cool to room temperature. These ribs, like other braises, soups and stews, tend to taste even better a day or two after cooking as the flavors have time to settle and develop a richness. We tossed it in the fridge for dinner the next night which was perfect because I was having drinks with a dear friend for her 29th birthday and wouldn’t be home until later that evening.

When it was time to cook them, my husband skimmed the fat off the top (hmmm…what to do with that tastiness sitting in my fridge…) and set the crockpot on low for an hour or so. I had hoped to make gnocchi or fresh pasta to go with the ribs but realized that I had none of the ingredients for either, so we settled for boxed whole wheat rotini (ah, my love hate relationship with whole wheat pasta. I’m trying to like it; really I am.) and broccoli. The result? Fall-off-the-bone-goodness with the rich meat flavor and the subtle lager lingering in the background. Verdict? I think I prefer the red wine braise but this was much less labor intensive and let’s just say I cleaned my plate anyway! 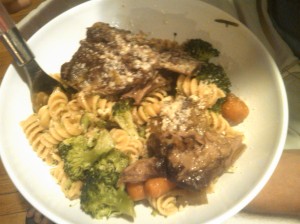