There are so many things I love about Twitter. One of them is the ability to connect and communicate with people with whom you might not otherwise know. Another is that it allows one to be a voyeur, of sorts, watching others interact with one another. This brings me to my  most recent meal. A few months ago, Adsum chef, Matt Levin and Top Chef Season 7 winner, Kevin Sbraga were chatting on Twitter.  As their online (and very public) conversation unfolded, they made plans to cook a collaborative dinner at Adsum. As an Adsum and Top Chef fan, I thought that sounded neat and tucked it into the back of my mind. Soon thereafter, I caught sight of the details, once again on Twitter, and booked a reservation for four knowing nothing about the menu or pricing but banking on Chef Levin’s top notch cuisine and Chef Sbraga, well, dude won Top Chef.

The day of the dinner, my best friend called out sick from dinner. She’s a huge Top Chef fan and I knew she had to be in bad shape to miss the dinner. Nonetheless, I was sad to see her go. Unfortunately, we couldn’t find another pair to join us and we had to change our reservation at the last minute. I hate doing that.

As we prepared to leave the house, Twitter provided us with a sneak peek as my friend, Amy, had the earlier seating. From her reports, we were in for a fantastic meal. We left the house with intentions of taking the bus and ended up taking a cab whose “meter didn’t work.” Oh well, better deal for both of us.

We walked in the door of the light and airy restaurant and were seated immediately. We were even lucky enough to have my friend, Jason, as our all-star waiter for the evening.  We  browsed the menu and I was immediately a little nervous for the pig tails. For someone who doesn’t eat much pork, pig tails seemed to be just a bit, um, adventurous. 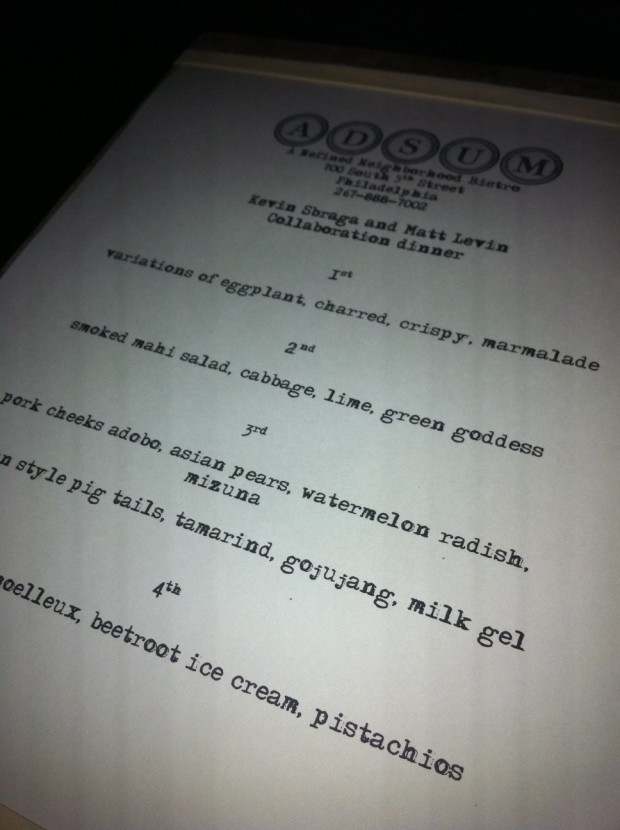 Although I didn’t realize there would be a wine pairing, we both opted for it upon Jason’s suggestion. We were almost immediately bestowed with some bubbly in champagne saucers (which my husband just adores.) My wine recollections for the night will be poor as I’m belated in my blogging, but each one paired nicely with the dish, especially the bubbly and the sparkling rose with dessert.

The first course was a variation of eggplant (crispy, charred and marmalade.) I wasn’t sure what to expect from this as eggplant isn’t exactly my favorite veg. 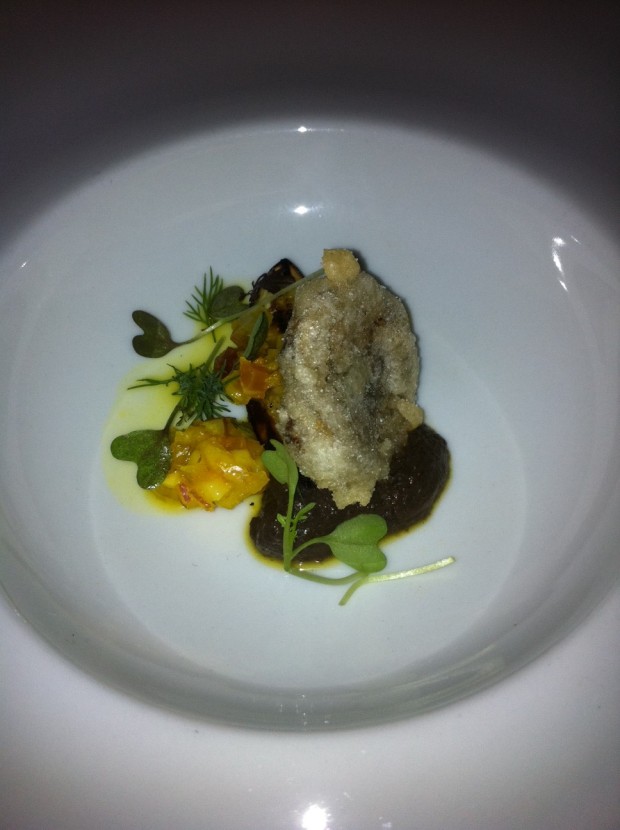 Much to my surprise (ok, I wasn’t actually that surprised) this dish was quite enjoyable. Although I was especially a fan of the marmalade, the three variations played off of one another nicely–and I always enjoy a nice crunch which the fried version so nicely provided. This was also one of Winston Justice’s favorite dishes, as he told me later on Twitter.

The next course was probably my favorite dish of the evening–smoked mahi with cabbage slaw and green goddess dressing. 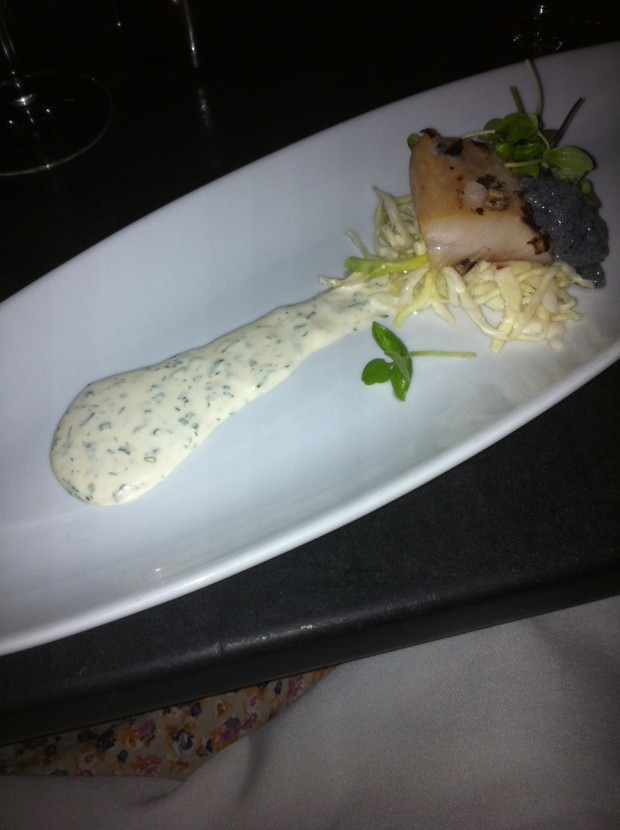 While smoked fish can sometimes have a very strong flavor, this mahi had such a subtle smoke that it was almost undetectable. The fish was cooked perfectly and had none of that overly fishy flavor. This dish as a whole was clean, light and refreshing and was paired with a white that was just as crisp and drinkable.

Uh oh, the pig tails were up next. We received our third wine and first red of the night. It was robust and matched the strong porky flavors nicely. 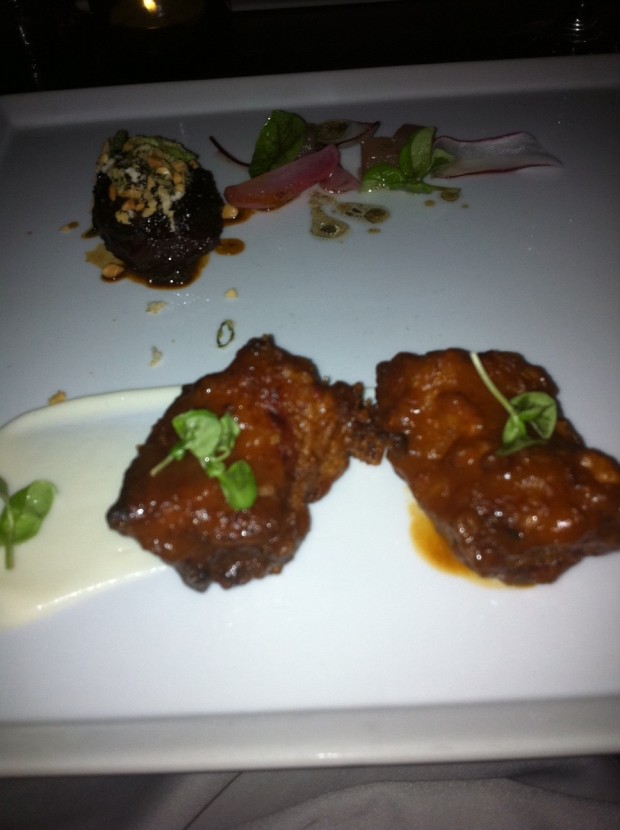 Pork cheeks adobo are on the top and the crispy Korean-style pig tails on the bottom. Both of these were phenomenal and packed with flavor in their own unique way. The pig tails felt almost like chicken wings (which made me feel a little better) and the pork cheek was fork tender. I could have eaten either one of these all night, but I was especially partial to the pork cheek adobo.

We ended the night with a chocolate moelleux with a beetroot ice cream paired with a sparkling rose. The moelleux tasted like a brownie but the star of the plate was the ice cream. I literally felt like I was eating liquefied beets. The flavor was so fresh and prominent. 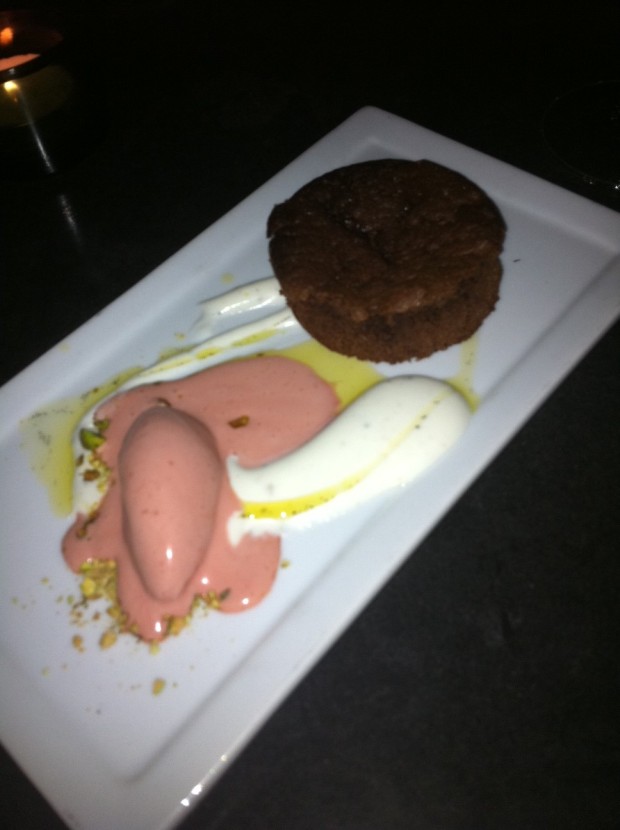 Chefs Levin and Sbraga were in and out of the kitchen throughout the evening, mingling with guests and quite obviously having fun with one another.  My husband and I had the opportunity to chat with Chef Sbraga for a bit and then we snapped this photo on the way out the door. Pardon the sunburn–those are the downfalls of being a softball coach. Check out these two four-eyed cuties! 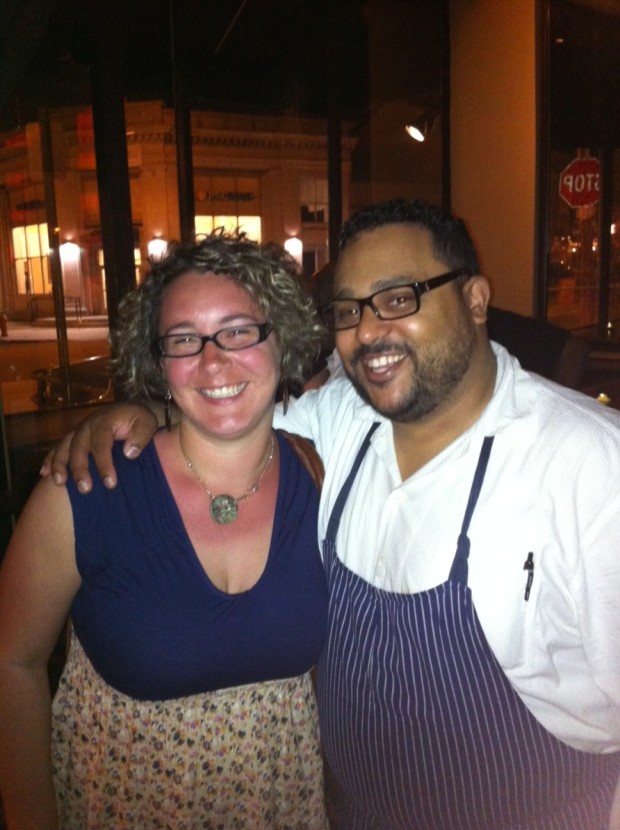